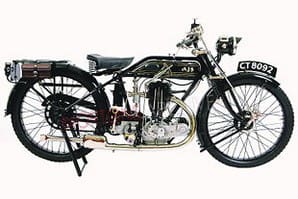 1909-31
In 1874 Joe Stevens of Wednesfield, Nr Wolverhampton began trading as J Stevens & Co, engineering blacksmiths. In 1894 he relocated to Tempest Street, Wolverhampton and was joined by two of his sons, Harry and Joe Junior. An American Mitchell four-stroke engine the company had bought fascinated Harry, although he was less impressed by the build quality and towards the end of 1897 had manufactured a better one. The reliable 13⁄4hp four-stroke with surface carburettor encouraged the formation of The Stevens Manufacturing Company in 1899.

Production of the first 292cc models started in August 1910 and initial production costs were met by Harry Stevens from income earned for designing a 349cc side-valve engine for John Marston of Sunbeamland. The singles grew to 315cc for the 1912 season and to 349cc a year later, while V-twins also joined the range. Entered in the 1911 Junior TT, AJS riders JD Corke and Jack Stevens finished 15th and 16th. Just three years later, Eric Williams and Cyril Williams (no relation) scored a Junior IoM TT one-two finish in 1914.

Further TT wins followed after WWI, including Howard Davies’ 1921 Senior TT win with his 349cc AJS, the only 350 to win the Senior. Side valve models were the mainstay of production in the early Twenties, with the first road going ohv model offered for general sale in 1923. An ohc model was launched in 1928.

Despite an enviable reputation and an extensive model range from 248cc singles to 996cc V-twins in sv, ohv and ohc form as well as a transverse V-twin motorcycles, car, wireless, sidecar and commercial vehicle production, the banks forced AJS into voluntary liquidation in 1931. An offer of £20,000 by Matchless of Plumstead, London beat BSA’s bid for the marque and AJS moved to East London. The workforce and the Stevens family were devastated, especially as the declaration of solvency by AJS was well founded and all creditors were paid in full.

All Wolverhampton AJS motorcycles are sought after. Despite a lack of period spares the effort of restoration is rewarded by the ownership of a fine motorcycle. 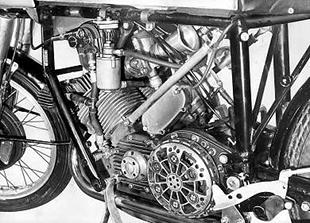 Despite the transfer of production to Plumstead the AJS and Matchless ranges continued in production largely unaltered, although the ohc model was briefly dropped. For the 1935 season the similar 348cc ohv single cylinder AJS model 16 and Matchless G3 Clubman were launched. Over the next year many more ‘new’ models joined both ranges. In little over a year the older models with the exception of the V-twins had disappeared and both AJS and Matchless offered a similar but not identical range of models.

AJS displayed an ohc V-four racer at the 1935 Olympia show, which appeared in supercharged form a year later. In 1938 it resurfaced again, this time with water cooling.

Matchless acquired Sunbeam in 1937 and registered the three companies as Associated Motor Cycles Ltd – AMC. Although Sunbeam was sold to BSA in 1943, the name AMC remained. The company built 80,000 machines for the war effort, almost all of which were the famous Matchless G3 and the lighter G3L which had telescopic forks.

After WWII AJS announced their new range. The 348 and 497cc model 16M and 18, were heavily based on the Matchless G3L with telescopic forks. Rear springing (16MS and 18S) was offered for the first time as an option in 1949, initially with ‘candlestick’ rear units, then the famous ‘jampots’ and finally Girling units. Rigid frame design was dropped during 1955. Competition and scrambles versions were offered of both capacities.

A parallel twin, the 498cc model 20 joined the range in 1949, followed by a larger version the 593cc model 30 for the 1956 season. The 646cc model 31 was released on the market for the 1959 season. Uprated versions, the CS-scrambler and CSR-sports roadster were also available.

The final, and largest, model was the 745cc model 33 also offered in CSR form. The so-called ‘Lightweight’ 250 and 350 single cylinder models joined the range in 1958. Production of all AJS four-stroke models ended in the autumn of 1966. 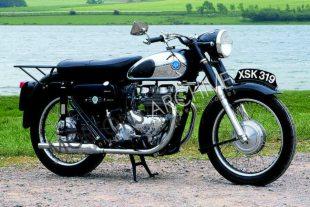 Although the cynics accuse AMC of blatant badge engineering with their respective AJS and Matchless marques, many are a joy to ride and a healthy mechanical spares back up is available for most models. Frame and engine numbering seems confusing, but experts can help. If considering a serious assault on the bank balance try a 7R but remember, many parts including the crankcases are cast in magnesium.

1967-to date
AMC collapsed and was absorbed into Norton Villiers. The AJS name was used for a range of competition two-strokes based on the Villiers Starmaker engine. Norton Villiers were struggling financially by 1974 and Fluff Brown bought and moved the AJS project to Goodworth Clatford, Nr Andover. Limited production of 247, 368 and 400cc two-stroke single cylinder off-road machines continues today.