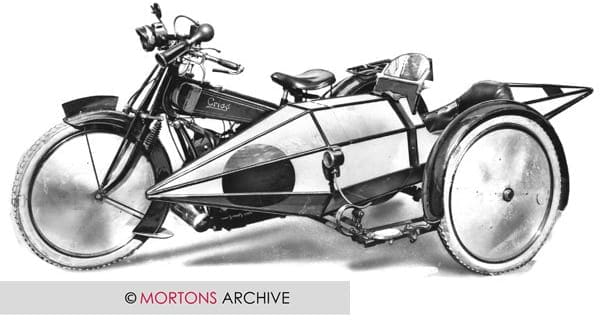 Uncommon as they are today, sidecars are an interesting footnote in motorcycling history. The timeline of the sidecar goes back to the late Victorian era when a significant period of mass technological advancement was witnessed in many industries.

Where it all began

Surprisingly, the sidecar pre-dates production motorcycles. In 1893 Mr Jean Bertoux, a French Army officer, invented what would later become known as the sidecar. However, they were initially intended for bicycles.

He managed to get his hands on a prize from a French newspaper for coming up with the best method of carrying a passenger on a bicycle. Bertoux’s design showed the sidecar’s wheels mounted on to the same lateral plane as the back of the bike, upheld by tubes connecting to the bike frame. Attached would be a seat and backrest with a footboard below.

It wasn’t until 1903, when a cartoon appeared in the British newspaper Motor Cycling, that the design finally came to life after a patent was submitted by Mr W. J. Graham of Graham Brothers from Enfield, Middlesex.

Soon after, the popularity of the sidecar expanded exponentially due to its usefulness and affordability in comparison to the price of cars at the time. Whilst the earliest styles were remarkably different from each other they did have one thing in common: a complete lack of health and safety standards. This was to be expected, as advancements could not have been achieved without experimentation, even if it was at the passenger’s expense.

In 1913, American inventor Hugo Young produced a brand new sidecar design that removed the rigidness of the then fixed sidecars. Instead, Young proposed a much more flexible joining, allowing the sidecar to move smoothly with the bike without affecting balance. The design saw an overall improvement, making the experience for the driver and passenger safer and more comfortable.

When Young launched the ‘Flxible’ Sidecar Company in Ohio, it quickly became the largest sidecar manufacturer worldwide. However, this only lasted until the 1920s when the popularity of the motorcycle declined due to the introduction of affordable cars.

Despite the decline, sidecars remained a cheaper alternative to cars and maintained some popularity through to the 1950s. Eventually, the Police and Armed Forces began to utilise sidecars for more occupational reasons.

During The Great War, the British Army was using sidecars to their full advantage, as the mobility of the Vickers machine guns could be improved. As the guns weighed around 36kg, plenty of manpower was required to move them. Thanks to the sidecar, the task was made considerably easier.

The first motorbike used for this purpose was the Clyno, due to its ability to hold a gun, tripod, ammunition and even spares. Eventually, a special unit was created called the Motor Machine Gun Service, which operated the bikes with guns attached. However, as the trenches were not an ideal place for the machines, they were not used often.

Whilst sidecars lost some of their popularity after the Great War, German soldiers continued to use them during WWII, with many of the sidecars being controllable in order to aid in their all-terrain abilities. The majority of the accompanying motorcycles were BMW and Zundapp.

The fall and rise of the sidecar

After the war, cheap cars were abundant and the sidecar lost much of its practicality and appeal, leading to a steady decline in the industry. However, this was not the end of the sidecar within the consumer market, as television shows and films from the 1950s featured them, making sidecars once again a recognisable relic of the early 20th century.

One such show was On The Buses, a 1970s comedy sit-com starring Stan Butler as a bus driver and his friend Jack Harper. The featured sidecar belonged to Stan’s brother-in-law. It ended up appearing a couple of times in the show, as well as the film adaptations.

As sidecars have remained on our screens for decades, it’s unlikely they’ll be relegated to the history books any time soon.