On an ‘mph per pound’ basis, the B.S.A. 'Golden Flash' must be one of the least expensive high-performance projects offered to the buying public in post-war years. In fact, every mile indicated on the speedometer at the machine's maximum speed, costs approximately forty-two shillings and sixpence : a standing quarter-mile in 16.5 sec. is thrown in for good measure.

Such performance does give the fast-moving, long-distance rider an opportunity to cover daily mileages that are likely to remain proud boasts throughout his lifetime, and it is to this type of rider that the 'Golden Flash' is most likely to appeal, for an outstand­ing feature of the machine is its ability to cruise at a speed dictated by traffic conditions rather than by the capability of the engine. In spite of this characteristic, the bottom end performance has not suffered and there is no low speed temperament to make traffic negotiation a niggling business of clutch slipping and throttle blipping.

Several efforts were made to get rid of a tendency to spit back through the carburetter when the throttle was opened quickly with the engine ticking over. This apparent weakness did not show at any other stage, and past experience has revealed that this slight fault can be cured by attention to the throttle slide. Starting was always effortless and the carburation was clean from low speed to maximum throttle. At the end of the test, the near-side exhaust pipe had blued slightly at the port, but this minor tendency toward induction bias had no apparent effect on the unit.

Both the handlebars and the footrests are located well forward and this produced a straight-armed position well suited to 'leaning on the breeze.' Although mounted forwardly, the handlebars are not low and did not induce tired wrists when riding in thick traffic. All controls, both for foot and hand, are adjustable and a satis­factory stance can be quickly arranged. An adjustable stop is now fitted to the brake pedal which can be set comfortably below the ball of the left foot. Both footrests are set on tapers and the gear-change pedal is mounted on a splined spindle.

All hand controls were pleasantly smooth in operation and this, particularly where the clutch was concerned, assisted toward clean and noiseless gearchanges. Some pause was necessary when changing from second to third gear, but on this occasion only was any unusual delicacy needed. Changes were quite positive and could be made as fast as the pedal could be moved. First gear was selected from neutral without sign of clutch drag and no difficulty was experienced when finding neutral at traffic lights.

No doubt the high degree of acceleration was due as much to well-selected gear ratios as to the excellent power output of the engine. Power output of substantial proportions is, however, necessary to maintain acceleration at above 70 m.p.h. and the manner in which the speedometer needle would continue moving beyond the 70 m.p.h. figures on the dial was most exhilarating. In this country, at any rate, the cruising speed of this machine is hard to define : not so difficult to ascertain was the minimum top gear speed, which could be assessed at 25 m.p.h. Below this speed, third gear was advisable if roughness in the transmission was to be avoided. At any speed, pinking, with the better quality fuels now available, could only be induced by brutal use of the throttle.

On any type of road surface the handling and steering were excellent. The hydraulically-controlled telescopic front forks — now fitted with two-way damping — provided six inches of well-controlled movement. This softness of the front suspension tended to accentuate the firmness of the plunger units fitted to the rear wheel, particularly on bad surfaces, but on all main roads ' the springing, aided by the comfortable dual-seat, gave tireless riding.

In every department
There was little evidence of the engine when it was at work. In every department — pistons, valve gear and crankcase — nothing could be heard of the unit when the machine was under way and little indeed when the machine was stationary. The subdued exhaust note was undoubtedly assisted by a high top-gear ratio (4.4 to 1), which ensured that no offence was given. Some slight noise emanated from the intermediate ratios of the gearbox, but against the overall excellence, it was little to complain of.

Both brakes were well up to their job and would stop the machine from high speed in a most reassuring fashion. During the unusually extended test, and in spite of very thorough use, the front brake needed adjusting twice only and the rear brake not at all. Some squeal from the front drum was experienced in the early stages, but this disappeared as the unit bedded down. Those unused to a unit of 8 in. diameter might consider the application to be fierce, but on closer acquaintance and using two fingers on the lever only, such criticism would undoubtedly disappear.

No definable vibration period existed throughout the engine speed range until the unit was working at maximum throttle opening in the intermediate ratios. 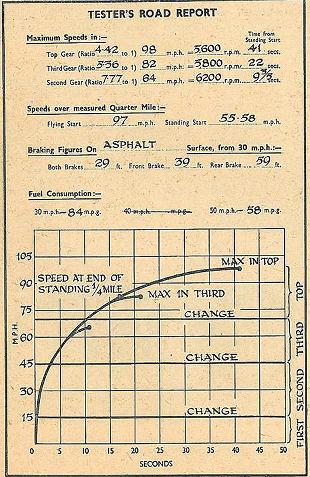 Several routine adjustments were carried out prior to the maximum-speed tests. These involved a check on tappet adjustment, magneto points and, on one occasion, the removal of dirt from the main jet. It is advisable to remove the 4.5-gallon tank to adjust the tappets, and this can be done by removing two bolts. At this stage, a recent addition to the tank-attachment lug at the rear was noticed; the bolt now passes through rubber bushes held in lugs welded to the tank. The work on both carburettor and magneto was easily and quickly done.

Several troubles were experienced with the electrical equipment, all of them subsequent to the maximum speed runs. A considerable quantity of electrolyte escaped from the battery and, leaking over both carrier and primary chaincase, spoilt the appearance of the machine. Inevitably, the wiring faults were discovered late at night.

The first consisted of a broken wire close to the battery, which was easily found. The cables that came away from the switch terminal posts were not so easily discovered. These faults did, however, give the tester an opportunity to discover the accessibility of the switch gear and ammeter in the nacelle; this is revealed by removing the two head lamp bolts and lowering the lamp. There is undoubtedly more room than would be available if the units were mounted inside the head lamp.

Two minor criticisms can be levelled at the machine itself. The first concerns the limited amount of  ‘free space’ in the oil tank. If several miles are covered at high speed, frothing oil tends to over-lubricate the rear chain which, in turn, flings a film of oil over the rear of the machine. This spoils an otherwise clean unit on which the only small leaks were at the filler caps of both oil tank and primary chaincase. The second point concerns the rubber cover to the gear-change pedal; in the duration of the test, in which 1,500 miles were covered, the rubber had worn sufficiently to show the metal of the lever, which finally chafed the toes of shoes and waders.

Small enough criticisms, both — and minor complaints when the general excellence of this good-looking machine is assessed as a whole.