Basically, Ghersi used a different make of spark plug than specified on his entry form. It was decided, some hours after the race had finished, to exclude him and the Guzzi from the final results but bizarrely not strip him of his fastest lap accolade, the official explanation being he was excluded from the final results, not disqualified outright, hence the lap time could stand. It was all rather strange and the announcement was met with hissing and booing when it was made during the prize giving. The Italian contingent was decidedly less than impressed too, vowing to not return to the Isle of Man.

Winner was CW ‘Paddy’ Johnston, the well-known Dublin-born Brooklands exponent, who raced his Blackburne-powered Cotton to victory. In truth, Johnston had no answer for the speed of the brilliant red Guzzi and its black-shirted rider (Ghersi was an ‘enthusiastic fascist’, reported The Motor Cycle, hence his choice of attire) but the Italian machine had too great a thirst to last the full seven laps without more juice, so a stop for petrol at the end of lap six meant Johnston was able to move ahead, Ghersi having led at the end of every other lap. 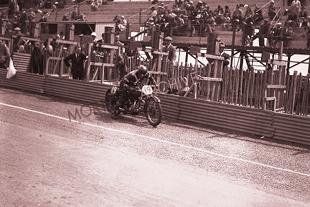 There had been 21 starters in the race, which ran to an energy sapping, machine breaking 264.11 miles, a full lap (37 and a bit miles) more than the quarter litres had been asked to cover before. Ghersi and the Moto Guzzi, the only non-British or Irish competitors, looked the class of the field in practice, so started favourite. Wal Handley (Rex Acme-Blackburne) appeared the most likely to challenge, while Jock Porter (New Gerrard), the Cotton-Blackburne trio of Johnston, Colgan and Morgan and the Levis of Edwards showed some pace too.

But Ghersi put a marker down early – his first lap was a minute under Handley’s lap record. Wal retired on lap three, Porter earlier, leaving the Cottons, headed by Johnston, to take the fight to Ghersi. But the Italian’s smaller fuel tank meant he had to stop and despite a brave attempt he finished 20 seconds behind Johnston – though his effort was to prove for nothing anyway.